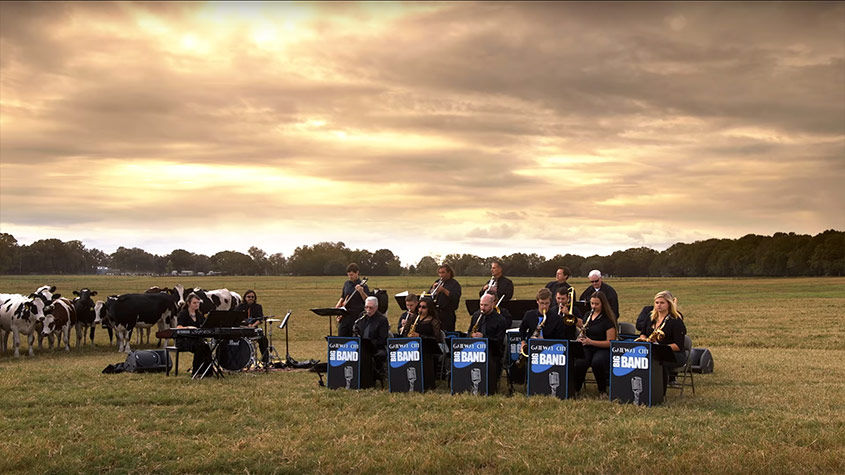 Create a 2 minute, highly shareable, unique video to promote the Florida Dairy Farmers message and the image of the dairy farming family, who cares for the land, their animals and the communities they serve.

Coming Up With A Plan
FDF, in cooperation with national partners, wanted to create a video that would spotlight the Florida Dairy industry, and provide positive promotion of the work they do and the product they produce. Blackburst consulted with FDF on the idea of showcasing a farmer in North Florida who plays Jazz to his cows. In previous years, YouTube videos of people playing music for cows had become somewhat popular. The cows in these videos seem to be drawn to music, and these amateur cow videos seems to draw the attention of the social media community.

Behind The Scenes – Location Scout
Testing the cows’ interest.

Blackburst traveled to Live Oak to meet Ed, who runs Shenandoah Dairy, and his cows. A quick test with the cows and a saxaphone and it really did seem like Ed’s cows were into it.

The Shoot
A few months later, a small team from Blackburst in Orlando traveled to Live Oak, FL to film Ed, plyaing a big-band style concert for his cows. We coordinated a sunset hour shoot in a picturesque field the 1st day for the concert shots. The following day we started early capturing ‘farm life’ shots of Ed tending to his animals. We leaned heavily on the natural beauty of the landscape and Ed’s genuine, visible respect for his animals and the land. Despite an unexpected overcast sky at sunset, the shoot was a complete success.

Published
Later than month, upon completion of the video, client feedback was very positive. In fact, leadership at the national level like it so much, they shared our video with CNN’s Great Big Story documentary team. The Great Big Story team loved the idea and sent a crew to shoot a more documentary type story about Ed and his Jazz loving cows. To maximize effect across web, social and traditional media outlets, FDF timed the release of the video we created with the release of the Great Big Story segment, which was featured on GreatBigStory.com, on the CNN mobile App and on CNN’s cable news network. Our social media video debuted on the Nation Milk site DairyGood.org, with shares across YouTube, Facebook and other social media sites.

Behind The Scenes in Live Oak, FL

The results are 2-fold. First was the creation of a very successful video for FDF’s social media efforts. Complementing and spawned from the social media video Blackburst produced, came the creation of a video for conventional broadcast media by CNN’s Great Big Story. Our social media video received tens of thousands of views and thousands of shares across various social platforms, just in the first few days. The Great Big Story segment was seen by millions and distributed on various digital and traditional broadcast channels.
You can see our portfolio page for more information about our dairy cow video here or view it below. You can see CNN’s Great Big Story’s video here.